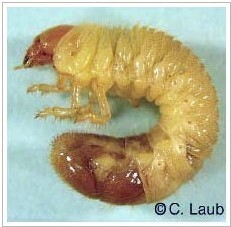 It happens every year – the Beetle-Grub Lifecycle.  While in the grub stage, which takes place in our region approximately August and April, they eat and weaken the root system of your grass, causing brown, dead patches in your lawn. You can’t see them, but they’re there, wreaking their havoc underground.

In late May to early June, the pupa forms and the adult beetle emerges. Over the course of the next two months, the adult beetle feeds on the foliage of your ornamental trees and shrubs with an insatiable appetite.  Along with feeding, the females start releasing a pheromone that attracts the males to begin mating.  Once mating takes place the female digs a shallow burrow in the soil and lays her eggs.

Egg laying lasts from mid July to mid August.  Eggs need moisture to develop and hatch.  Typically it’s hot and dry during this time, but to keep your grass from burning, you need to water 2” – 2 ½” weekly when the temperatures are over 90°.  Just what the eggs need to keep the cycle going.  It’s a Catch-22 unless you tackle the grub/beetle problem!  It’s imperative you take action before they not only feast on the most costly features of your landscape, but before they lay their eggs, thereby starting the Beetle-Grub Life Cycle all over again!

How, you ask?  We thought you’d never ask!

ProLawn grub treatment is a special application for your particular lawn and infestation. We start in April and applications continue into September.  As a result you can help prevent some of the most common lawn problems before they start. Early fall marks a peak feeding time for grubs as they fatten up for winter. Once soil temperatures begin to drop, grubs dig in, heading six or more inches into the ground, where they’ll stay until Spring temperatures rise.

When they emerge in the Spring, grubs don’t eat much, making Spring grub control less effective. Lawn damage you see in Spring actually occurred the previous fall, which makes control & prevention applications throughout the Summer and early Fall even more important. Stopping grubs before they go deeper underground in the Fall will dramatically limit lawn damage.

Want the Pros at ProLawn to help? Give us a call at 540-662-8316
to determine the best course of action for your situation.

FOR A MORE DETAILED QUOTE CLICK HERE.
Ask About Easy Pay Plans
OUR QUEST – Quality Unconditionally Every Single Time. Your reviews are important to us.

Your ProLawn Guarantee of Satisfaction

Prolawn is committed to providing the highest quality lawn care possible. As a client who has purchased one of our regular programs, you’ll receive free service calls. If you aren’t satisfied, just let us know. We’ll make it right or credit your account for what you paid for the last application.

We accept all major credit cards

Ask About Our Easy Pay Plans!

Review us on Google